So you might have noticed update 112 has been a while in the making, and that’s because it’s our biggest update yet. We’ve made fundamental changes to almost every system in the game, added in a huge number of art assets and laid the foundation for many future updates. For every change you can see, there are loads you can’t (yay, game development!). 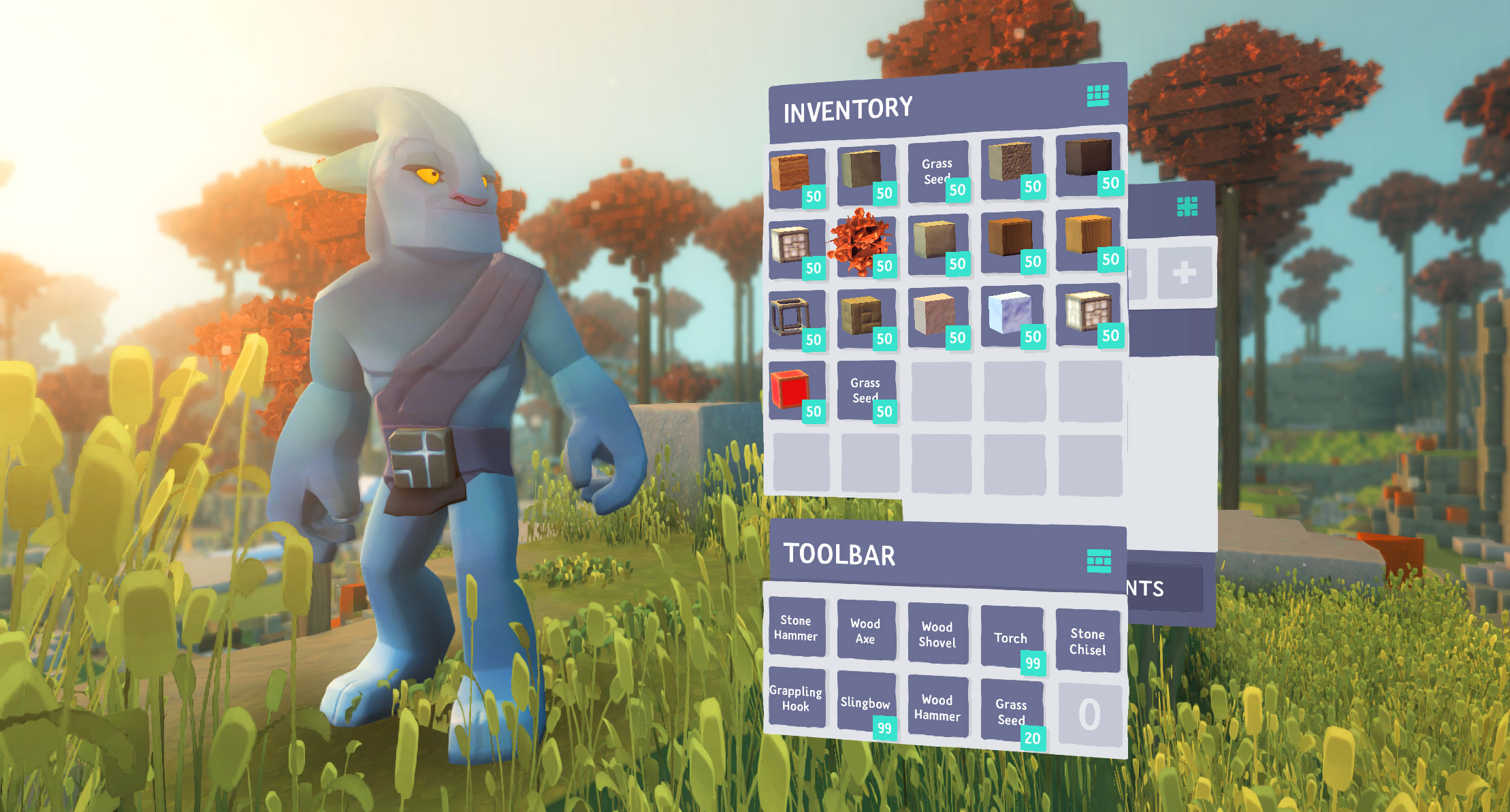 New Characters – We have characters! You can now choose between masculine and feminine player models  (go to the menu > gameplay options > change character model)

New Creatures – Spitter and Livestock creatures have full, detailed models and now spawn across all worlds

New Weapons – The Slingbow, Arrow and Explosive Arrow (!) are all painstakingly modelled

New Equipment – The Grappling Hook has been beautifully AND painstakingly modelled

New Items – New items have been added including consumables like Raw and Cooked Meat, and recipe items like Essences.

World Builder – Connect to a world builder project and preview your world in-game!

Whilst we’re chatting, now also feels like a great time to answer some common questions from the community. Settle in!

– “No updates for a few weeks. Are you dead? Was Guildford plunged into a nuclear winter?”

We’re fine, and sunny Guildford is also fine. In fact, we’re great! This release lays the groundwork for well over 12 months worth of new features and content. We appreciate and encourage your financial support of the game we aren’t going anywhere, we’ve just been knuckling down to get this big release out the door. In fact, the team is *growing*, so say hi to Jim, Ollie and Gerry!

– “Can you update the game more often, we miss regular updates!”

This is a decision we’re always juggling: big, infrequent updates vs smaller more frequent updates. We don’t plan to leave multi-month gaps between updates, and we’ll certainly try to avoid them as much as possible in the future. Either way, if you think things are quiet be sure to check in on the Official Oort Online Forum (http://forum.playboundless.com), it’s where we’re most active and share early looks at upcoming features, art and releases.

– “I can’t afford the game right now, will you be doing a sale?”

Throughout early access we’re not planning on having a sale. Why? While the game is in pre-alpha we’re treating it much more as access to an exclusive development club rather than simply just the ability to play a game in early access. With your copy of the game you get access to chat with us directly on the Official Oort Online Forum (http://forum.playboundless.com), the ability to feedback directly to development with surveys, access to and exclusive items and in-game titles that 1.0 players won’t get (which differ depending on which edition of the game you have). We hope when you factor in those extras, you’ll agree it’s worth the current price of entry.

We love [feature] as much as you, and we’re really excited to start working on [feature]! Right now we’re working on [other feature], but if you’re really passionate about seeing [feature] soon make sure to grab a copy of the game and join our development club as you’ll be able to vote for [feature] in our next survey. We read all of the feedback in every survey (we even have a quiz to guess your results!) and we really do listen. Your thoughts, ideas and opinions really do shape the development of Oort Online.

– “Wasn’t Oort Online meant to be finished, like, next month?”

Technically, yes. We had expected to deliver what we considered a 1.0 for Oort Online towards the end of this year. We had such an amazing response to the announcement of Oort Online over the last 12 months we decided to go *big*, even bigger than we’d originally planned to. To support this, we’ve committed more resources and the whole of Wonderstruck and Turbulenz are now working on it (vs 50% of the team this time last year). In fact we’re growing the team still so if you’re a talented game developer/designer/artist, get in touch. So yes, we’d expected to launch a 1.0 this year, but we’re now planning for much more ambitious 1.0 next year. We’ll share more about this in the coming months.

Now we’ve laid the foundations, we’re planning for a release that will enable a big portion of the Oort Online core gameplay loop. This will include portions of the economy, crafting, Beacons and trading. We’ll post more in the coming weeks. As well as that, we’ve got a few other cool announcements to make before the end of the year.

– “Ben has fantastic hair, where does he get it cut?”

There are obviously some things we can’t discuss, and this is one of them.

This release adds a lot, but there’s still much, *much* more to come (and I’m going to stop now because I’m so excited I might spill all our secrets). We haven’t even talked about our work on progression, Titans, Portals, Beacons and other super-top-secret features. Follow us on Twitter, Facebook or check out the forum to get the latest when we start teasing what’s next…

We hope you have fun with this update. As always we’re looking forward to your comments and thoughts.

Thanks from the dev team,

If you’re a total Oort nerd, here’s the complete changelog:

– New damage system for blocks, entities and props (eg: blocks store damage for up to 8 seconds)

– Added Stone Axe and Stone Shovel. Improved ability over wooden tools to destroy block types that these tools are effective against

– Added advanced item drop system. Allows drops to be given depending on the type of damage inflicted, different likelihood of drops

– Added explosive items. Certain items can cause explosions on impact that damage blocks, creatures and players

– Added lightning storms with thunder sound effects to some worlds

– Added animated ammo on the Slingbow

– Creatures no longer walk through each other or the players, keeping a radius around themselves free from other entities

– Creatures no longer try to keep running into walls, once they hit the wall they will stop

– Added a torch sound when the player is holding a torch

– Added a trail behind arrows

– Render changes to make the emissive and specular effects visible at distance. Light block etc look bright in the distance

– Reduced set of low damage blocks to mold and leaves. All other blocks take full impact damage (except bounce blocks)

– World config files are now json rather than js files. You can still load your old configs, but you will need to rename them from .js to .json first.
– Block/Liquid identifiers are now using the human readable names found in-game (Stone, rather than STONE_EARTH_BASE).
– Connect to a world from the game!
– Applies to Generator/Biome visualisations: Distorted, Distorted + Islands, Caves, Deposited and Final.
– Next to the usual blue visualisation button, there will now be a green button which launches a server window.
– From within the normal Oort Online game, going to the world menu (if the world builder is running) will show an option to change to the ‘World Builder’ universe where any server windows opened in the world builder will appear.
– The server visualisation supports everything a normal visualisation does (disabling block types from the visualisation, reacting to colour changes on blocks and sliders in the editor), only that instead of seeing the chunk rendered in the world builder, they will be sent to your game client who will then mesh them for a true in-game view of the world.
– The server does not have full game capabilities, it is quite literally dumb and does not contain any game logic or code. The game client will be able to run around, fly, use the grappling hook and edit the world predictively as you normally would, but you will not be able to get block drops, nothing is saved, and if you manage to get more than 1 game to connect to your server visualisation you won’t be able to see each other.
– The server does not send minimap data or data for LOD’ed (Level of detail) chunks, so a full panorama won’t be possible, and you may want to increase your mesh quality higher in the game options to see further into the world.